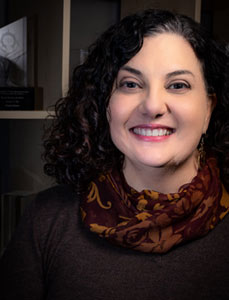 Recognized as an leading international designer, Lisa’s projects can be seen throughout North America, Europe, Asia, Australia, and the Middle East.

Recent clients include: Fort Edmonton Park in Alberta, Canada, Dollywood Theme Park in Pigeon Forge, Tennessee, the Fort Worth Air and Space Museum and the Hard Rock Cafe in Tampa.

Lisa was recognized in 2019 as a TEA Master. Her work has been recognized with sixteen Lumen West Awards of Merit, three Lumen West Awards of Excellence, a Light for Living Award, and two IIDA Awards of Excellence for her work on the Museum of the Cherokee Indian and Morongo Casino Resort and Spa and seven THEA Awards for Outstanding Achievement. Lisa was also honored with a nomination as an Outstanding Woman in Business by the San Fernando Valley Business Journal.

Educated in theatrical lighting design at San Diego State University, she launched her career at Walt Disney Imagineering, creating lighting for themed environments prior to founding Passamonte Lighting Design, Inc. in 1995. In 2001, she merged her firm with Moody Ravitz Hollingsworth Lighting Design, Inc. and together they created Visual Terrain.

In 2011, Lisa became the co-owner of Visual Terrain with her husband, David Green.