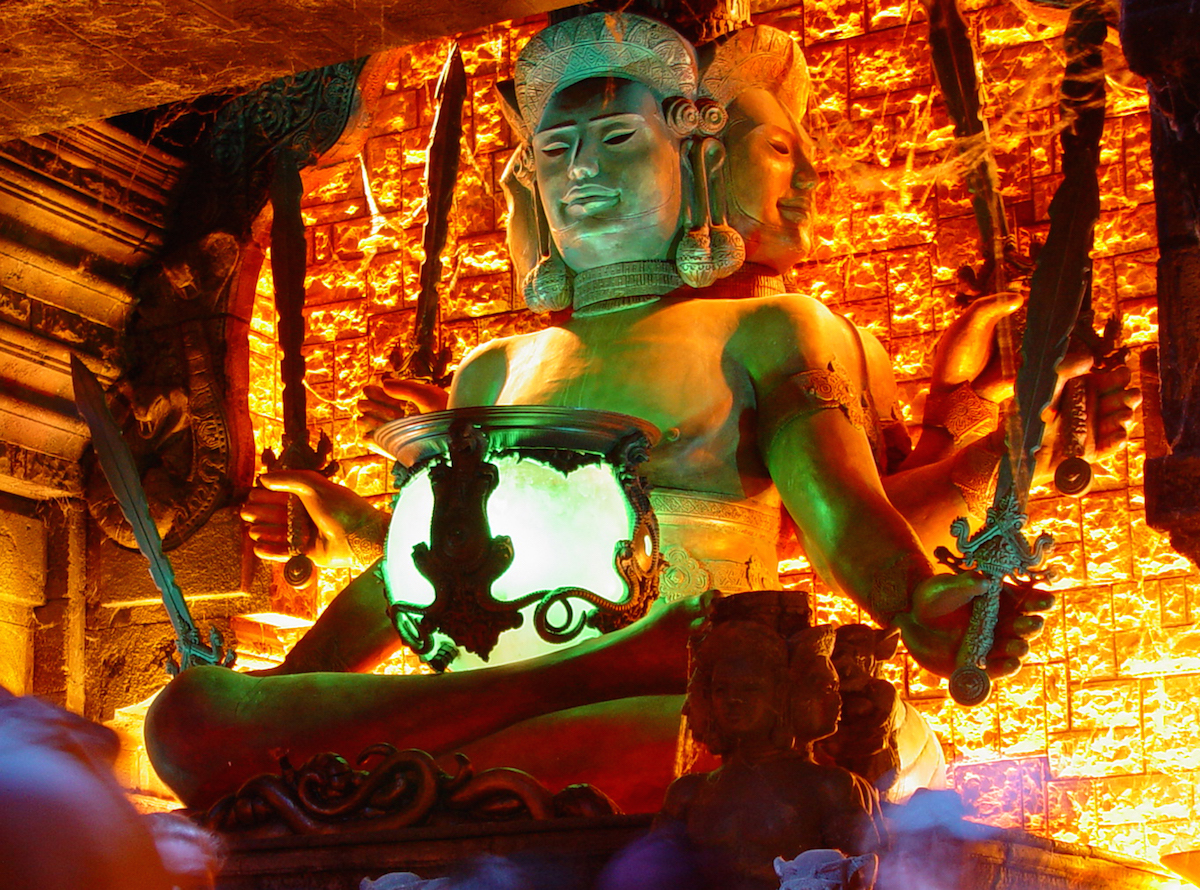 Adventurer Lara Croft leads us through her latest adventure at Paramount’s Kings Island, located in Cincinnati, Ohio. Developed by Paramount Parks and Technifex, Tomb raider capitalizes on the idea of using an existing ride vehicle design, and building an experience around it.

While the ride vehicle may be conventional, the attraction itself is anything but. Nothing can prepare guests for the mystery, intrigue and pulse-pounding excitement of Tomb Raider: The Ride, inspired by Paramount Pictures’ Lara Croft: Tomb Raider, Starring Academy Award® winner Angelina Jolie.

Guests will test their mettle against en epic battle of fire and ice. Hurtling through the darkness, they come face-to-face with a 50 foot carved stone goddess with lightning eyes; glistening, razor-sharp, ice stalactites and roiling, red-hot lava pits, twisting and tumbling as they struggle against the fury of the angry goddess.

Visual Terrain worked closely with attraction developers Technifex and Paramount Parks Design and Entertainment to create a dynamic guest experience on a sensible budget. To reduce costs and tie the attraction to the film, Paramount Pictures shipped massive scenic elements and props from Pinewood Studios in England to be reused as part of the attraction.

To decrease operating costs, careful attention was paid to choosing lighting fixture and lamp combinations for maximum life. robotic lighting equipment was minimized to further reduce maintenance, without impacting the quality of the guest experience. Compact fluorescent and HID sources in architectural light fixtures were used to increase lamp life in the exterior and interior queue. Interior scenarios are lit with a combination of architectural and theatrical fixtures.

Programmed lighting sequences in the entry queue, preshow and main ride chamber are all controlled from a Strand 510 LPC triggered by an Anitech Systems show control system.

The largest challenge was to light the three distinct scenarios in the main ride chamber, or “Heart of the Tomb.” These include a 60 foot tall goddess wall, a massive field of stalactites suspended from the ceiling and a bubbling “lava” water feature at the floor. The room had to be analyzed to determine lighting positions that would not cast shadows when the vehicle was parked at any of the three scenarios in chamber. Theatrical fixtures were attached to the side walls on 70 foot vertical pipes, and on a catwalk 70 feet off the floor.