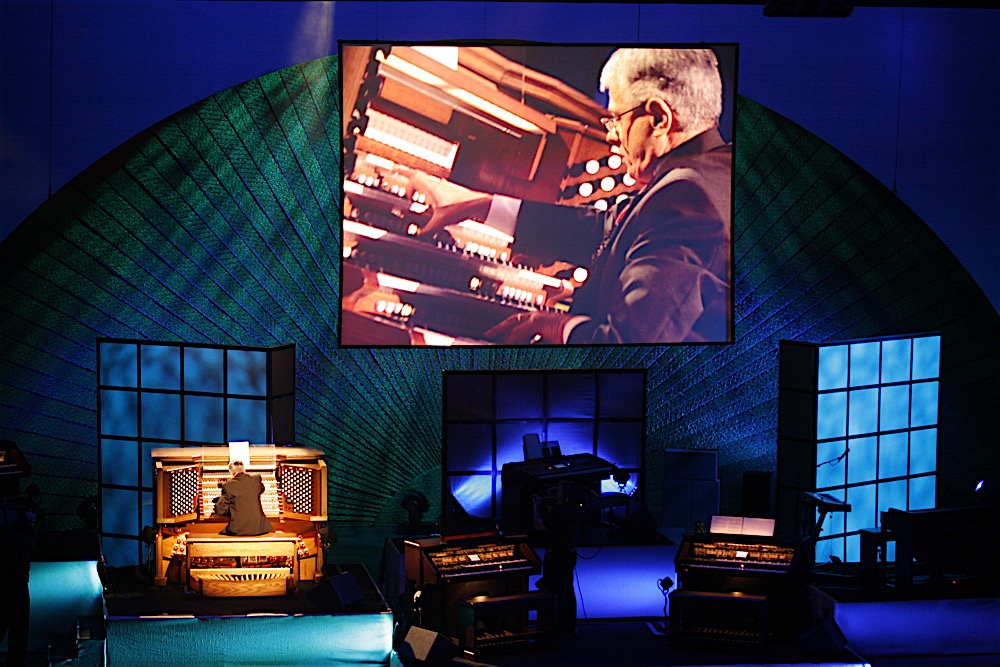 When asked about the concept for lighting the Organ Power concert, Lighting Director, Jeff Ravitz, explained, “Organ Power is the perfect mix of corporate event, concert, and TV special, and we design it accordingly. The video is used to bring the audience closer to the performance. For that reason, we approach the television side with utmost seriousness. We attempt to showcase and enhance the instruments, which are quite beautiful with their wood grain cabinets and classic designs. Then, we must make certain that the performances are properly lit for both the audience and the video. The musicians’ hands on the keyboards are of paramount concern. They are poetry in motion and their talents and skills are half the enjoyment for the audience.

For this show, the artists’ feet are almost as important as their hands, since they all play foot pedals with dexterity that must be seen to be believed. One fabulous performer can beat all speed records–in high heels! So, we provide specially mounted lights just for the foot pedals. Finally, we want to make certain that the musicians themselves, all worldclass virtuosos, look perfect for the camera as well as for the theatre audience. Once we achieve all of this, we also create cues that keep pace with the mood, tempo and style of each musical piece. When we’re finished, it’s as complex a show as any we create.”

Elaborating on the design concept, Lighting Designer, Kristie Roldan went on to say, “Our design allowed us to create an intimate area for each musician’s performance, while evoking the mood of each song. Saturated colors were able to transform the stage for each piece allowing us the flexibility to encompass a spectrum of moods.”

According to Eileen Thomas, Production Manager, “This was the best year yet! Everything was right on target. All the technical elements worked beautifully together to provide a stunning backdrop to the instruments and the performers. Laura Fine designed a sophisticated elegant set that created the visual tone for the evening.”

When asked about the concept for the design, Laura explained that she chose to represent the Asian origins of the Roland organization with the modern elements of western design. “In years past, the backdrop has been predominately white painted with light to add color. This year we went with a different approach by creating a large-scale blood orange Japanese fan for the background, which helped with the scale, verticality and color and provided a modernist slant using traditional Japanese shoji screen panels on the stage.

One of the challenges of the Carpenter Center is the relationship between the human figure scale sitting at the Roland products and the very massive proscenium arch.

By staggering the Shoji panels in a wide band across the stage and bringing in a main vertical element, the fan feature, we were able to use this large stage to our advantage by breaking up the expansive space. Because of the fabric we chose for the screens and the way that Jeff and Kristie lit them, they appeared to be internally lit creating a light box effect that gave way to a wide spectrum of lighting possibilities. What we accomplished within this setting was a grand picture for the live audience and at the same time an intimate concert for video.”

Dawn Hollingsworth, Technical Producer, concluded, “This is our sixth year producing Organ Power and as always, we are so fortunate to work with the staff at Roland. Over the last few years, our collaboration has allowed the show to evolve with respect to the entertainment value without sacrificing the product message. The artists loved our ideas and it showed in their performances.”

Both events were held at the Carpenter Performing Arts Center in Long Beach, California on January 16 and 17, 2007. This is the ninth annual production in association with other Roland activities surrounding The NAMM Show at the Anaheim Convention Center.