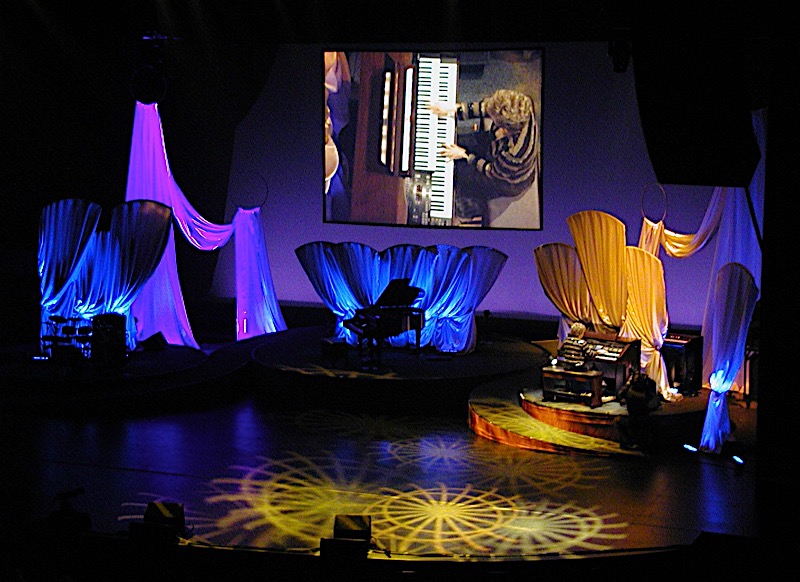 This event was held at the Carpenter Performing Arts Center in Long Beach, California on January 17 and 18, 2006. This is the eighth annual production in association with other Roland activities surrounding The NAMM Show at the Anaheim Convention Center, and was Visual Terrain’s fifth consecutive production of the show.

Traditionally, Organ Power is staged with both live and videotaped performances.  This year, Set Designer Edward Marks added another challenging element to the staging with raised turntables and serpentine ramps, creating intimacy to the expansive stage.

To meet the logistic lighting challenge of a revolving set, a large part of the solution according to Lighting Director Jeff Ravitz is careful coordination and flexibility. “Our goal was to create an intimate setting for each performer and at the same time anticipate the next mood with a transition that signaled to the audience a musical change without disrupting the mood of the current performance.  In one particular situation, we went from festive pinks and blues to the sharp lines and cool regal lighting of a cathedral,” Ravitz explained.

“This show is particularly demanding as a corporate event, and such a creative challenge.  We are fortunate to have assembled an amazing team of professionals who continue to help us reinvent the show experience each year,” remarked Dawn Hollingsworth, Technical Producer.