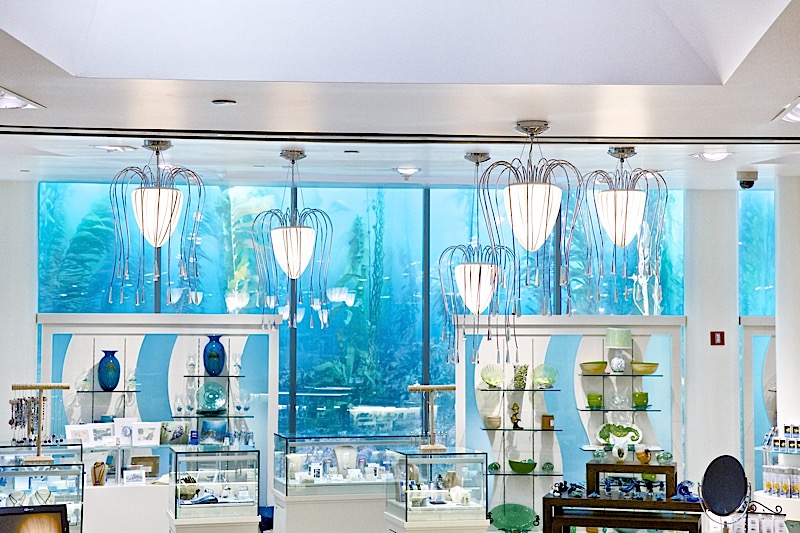 The Aquarium of the Pacific’s Pacific Collections gift store was expanded from 4000 to 6000 square feet and included a comprehensive remodel. The new approach is bold and clean, with a gently arching layout. Interior lighting is a combination of daylighting from skylights overhead and artificial lighting from recessed multiple accents using crisp 4K LED spot beams, which replace the original PAR30 lamps.

Large skylights arranged for optimum daylight harvesting allow the lighting system to reduce intensities to save electricity during peak daylight hours, and then boost levels after sunset.

Delicate care was taken to place recessed accent lights to sweep across the ceiling in a fanning arc layout that had to bridge between the new and old rooflines and avoid existing mechanical obstructions. The “Kelp Wall” extends the entire length of the new expansion area, and is lit with linear LED fixtures, controlled in 12” increments.

The outer wall features a large-scale photo mural of a kelp forest captured by underwater photographer Jim Hellemn. At night, when viewed from the exterior, a “sunlight through waves” gentle ripple effect plays across the entire length of the kelp wall to give it even more depth and subtly animate it. An astronomical time-clock triggers evening programming of the lighting effect which continues until midnight when lighting is reduced to only interior security lighting for ultimate energy savings.

This new addition to the Aquarium gracefully joins the existing architecture and brings the sense of the sealife interior to the outside, blending the property line between the building and the nearby bay. The project received the 3 Green Globes rating, demonstrating leadership in applying best practices regarding energy, water and environmental efficiency.