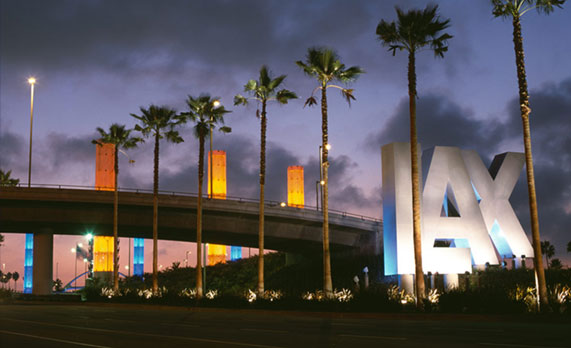 The design concept called for fifteen 110-foot towers at the entrance to the airport, and another 15 smaller towers stretching down Century Boulevard to create a gateway of light and animation into the airport.

All towers were to be internally illuminated, and capable of changing color remotely. Simple enough – or so it would seem. “Design one, and you’ve designed them all” was the impression we had. The task at hand turned out to be much more complex. In fact, each tower, or pylon, had to be studied independently. Lighting placement was driven by the steel placement, structural concerns, and accessibility. Computer renderings and mock-ups had to be built in order to completely understand the scale in which we were working.

In order to meet the demands of changing color, and even distribution across the glass, with no structure shadows, fluorescent, neon, and even LED sources were exhaustively researched. The conclusion was to use architectural color changing luminaires for their compact size and limited power requirements.

Designing the Sepulveda pylons required extensive research and mock ups. The challenge was to evenly light a 12 foot diameter tower of frosted glass, with no structure or fixture shadow from the inside.

After the structural requirements for wind loading and seismic were engineered, our first job was to translate the steel structure and glass into 3D within AutoCAD 2000. This would be the only way to verify fixture clearances.

Even though the pylon is 12 feet in diameter, the actual working space within the steel structure is substantially smaller. Once we had factored in electrical panels and panel clearances, ladder clearances and OSHA requirements, we were almost out of space.

At the same time that the computer modeling was being completed, a 25-foot-high, half-section of structure was being assembled alongside a building in Irvine, California.

Once this temporary structure was completed, different types of glass were then attached to the sample structure, and various light sources were tested to find the best combination of fixture type and glazing.

Working with the electrical engineer, Irving Selden, and Helix Electric, the power requirements for both fixture power and control were determined, and a layout of switchgear was finalized for the base of each pylon. Since the pylon lighting is all fed from street lighting power, the fixtures operate at 277 volts. In order to operate the control electronics in each pylon, a step-down transformer provides 120 volt power to the electronics.

Maintenance platforms were added to the plans five feet below each lighting position to allow for easier access for service and relamping.

We had to design custom mounting brackets to attach the fixtures to existing horizontal steel quickly and safely. With each fixture weighing more than 100 pounds, the brackets themselves has to be reviewed by the structural engineer. The brackets were then manufactured by Martin professional from 3/8″ steel.

Power and control lines were run in opposite corners of the structure to avoid the possibility of interference. An isolated DMX feed controls eight lights at each level of the pylon. Adjacent fixtures on each face are addressed identically to cut the number of channels in half. Even with this measure, the 15 Sepulveda pylons use over 2,000 channels of DMX control.