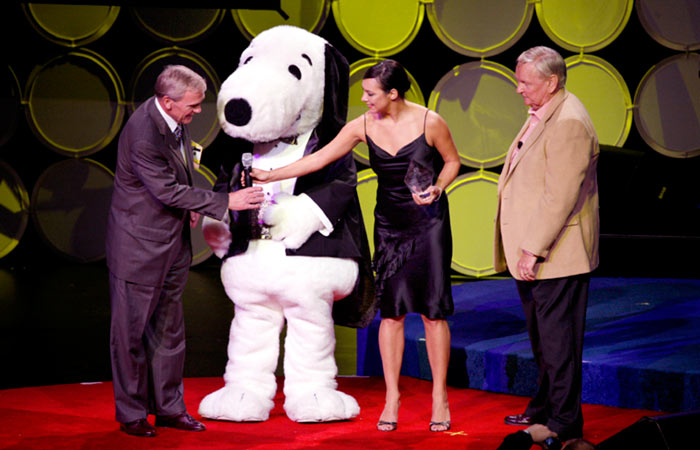 Visual Terrain designed the lighting and set for the 2006 International Association of Amusement Parks and Attractions (IAAPA) Kickoff Event presented last month at the IAAPA Attractions Conference and Tradeshow Expo in Atlanta, Georgia.

Produced jointly by the Themed Entertainment Association (TEA), IAAPA, and ShoConcepts, the 2006 IAAPA Kickoff Event was the opening event for the annual IAAPA Expo trade show. It featured industry leaders discussing the latest trends in the industry and honored individuals who have made significant lifetime contributions. Part awards show, part morning talk show, the IAAPA Kickoff was presented to an industry audience of nearly 2,000 leaders, executives, and visionaries.

According to Chip Cleary, senior vice-president for Palace Entertainment and IAAPA third vice chair elect for 2007, “When IAAPA decided to update the What’s New Theatre into The Kickoff Event we knew we needed a great new look to the show and that the lighting design and execution would be key to making the show POP. “Visual Terrain took a limited budget for equipment and made it look like a world-class production. Our thanks to the whole Visual Terrain Team and in particular Edward Marks and Nick McCord for their expert and creative talents in helping us attain our goals,” Cleary concludes.

Gene Jeffers, executive director of TEA, talks about the collaboration between TEA, ShoConcepts, and Visual Terrain saying, “It was very gratifying and comforting to have such quality professionals working on the team led by Steve Ryan at ShoConcepts. Visual Terrain’s Edward Marks and Nick McCord provided stunning lighting design to complement the set design and help set the mood for the Kickoff Session. Both Marks and McCord helped set an entirely new bar for the opening session of IAAPA Attractions Expo 2006. As the executive producer for the session, TEA deeply appreciates their willingness to work on this project, a first for the association.”

When asked about the challenges of designing in the venue lighting designer Nick McCord explains, “We looked for fixtures that could deliver the punch needed for the wide stage in the Georgia Ballroom and help us stay within the modest budget. The Martin Mac 700 moving head fixtures were bright enough to give us the saturation desired and provide us with enough patterns to give a variety of different looks.”